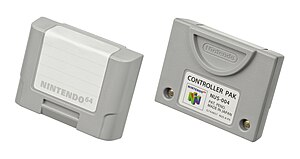 The primary component that makes up the Controller Pak is a 28pin, 32,768-byte SRAM chip, backed by a 3.3V battery located on the opposite side of the PCB. The battery supplies a low current to the SRAM when either not plugged into a controller or when the console is turned off, preventing the SRAM from losing data. While the controller's accessory port supports a 16 bit address, the Controller Pak leaves the 16th bit disconnected, as the SRAM only uses 15 bits for addressing. At least some, if not all, of the official Controller Paks used the LH52256CVN SRAM chip manufactured by Sharp.

Alternative SRAM chips do exist. Any chip that follows the same pinout and runs on 3.3V should be compatible. One example is the AS6C62256-55PCN made by Alliance Memory. While not produced anymore, Toshiba's TC55257DFL-85V and Chiplus' CS18LV02563 are also compatible.

The pins of the SRAM chip are mapped 1 to 1 with the accessory port's pinout, except for pin A15 (the 16th address bit) being left disconnected. The Chip Enable pin is inverted on the PCB using a transistor, meaning that the pin must be pulled HIGH to enable the chip. Write Enable and Output Enable should be pulled LOW to enable their respective function. Refer to the SRAM's datasheet for how to read/write data.

Save data management on the Controller Pak is facilitated through a simple proprietary filesystem. In all official and unofficial Controller Paks, there are 32,768 bytes of SRAM available, which is split into 256-byte sectors referred to as "pages". This allows for a maximum capacity of 128 pages, 5 of which are reserved for the filesystem data, and the remaining 123 for user software.

Retrieved from "https://n64brew.dev/w/index.php?title=Controller_Pak&oldid=4189"
Categories:
Cookies help us deliver our services. By using our services, you agree to our use of cookies.