The Peripheral Interface, or PIF manages many of the critical functions of the N64 console.

The PIF and CIC (inside the cartridge) are both custom versions of Sharp branded SM5 4-bit microcontrollers. These microcontrollers were also used in the Game & Watch handheld games, so Nintendo already had developers that were familiar with them. While the core functionality of the PIF and CIC are generally understood, the microcontroller model is custom and therefore not well known.

There has been some effort to reverse engineer the PIF and CIC communication to ease the process for creating compatible flash carts. At least 2 projects went through the time effort and money to decap the chips and view the internals of to better understand what they are doing.

Disclaimer: All of the CIC actions described below have been done successfully as part of a University project. Some of the details are missing whether it was to avoid encouraging piracy, simply not required for the core of the paper or lost in the language translation (authors live in Germany) is unknown. 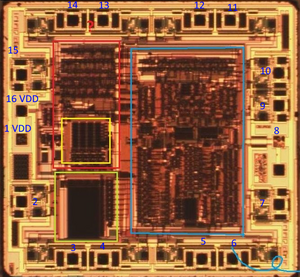 The test modes of the CIC are available on most (all?) retail cartridges.

Pulling TS:0 and/or TS:1 high before power on will place the SM5 controller in one of 3 test modes. (Which test modes and which pin states are unknown) It's also unclear if you can change between test modes while the unit is powered on.

The fourth state is standard usage with TS:0 and TS:1 tied to ground.

It's unknown how slowly you can clock the CIC.

Which mode is still unclear but the following functionality is available.

The Stop instruction is encoded as 0x76 which will assist in determining if the high or low nibble should be input first. This instruction also stops the TIO clock upon execution, so we have a clear external indication of success.

Port 2 of the CIC can be used to output either the AREG register or the Program Counter (PC), it's unclear at this time if the difference is achieved with different test modes or by modifying internal configuration registers.

NOTE: On power up Port 2 is configured for Input, an internal configuration register must be modified to make it output.

This process is very confusing so it may take some experimentation to work out the exact steps and details, the original document tries to explain but it feels like some details are missing.

Jump Instructions are 2 bytes, the first nibble is the instruction and the following 12 bits are the destination address.

Being in test mode seems to have a side effect on this instruction, inputting only the Jump instruction followed by a zero nibble, the second byte is loaded from the ROM, which is an instruction but is treated as data. The Jump instruction is then executed and the PC can be viewed on Port 2, as well 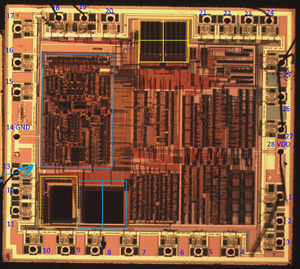 The PIF handles a lot of very core functions in the console. While the PIF chip is clearly a custom part, it appears to be heavily based on the SM5K (4/5/6) series. The instruction set and features match closely.

Retrieved from "https://n64brew.dev/w/index.php?title=Peripheral_Interface&oldid=1586"
Category:
Cookies help us deliver our services. By using our services, you agree to our use of cookies.